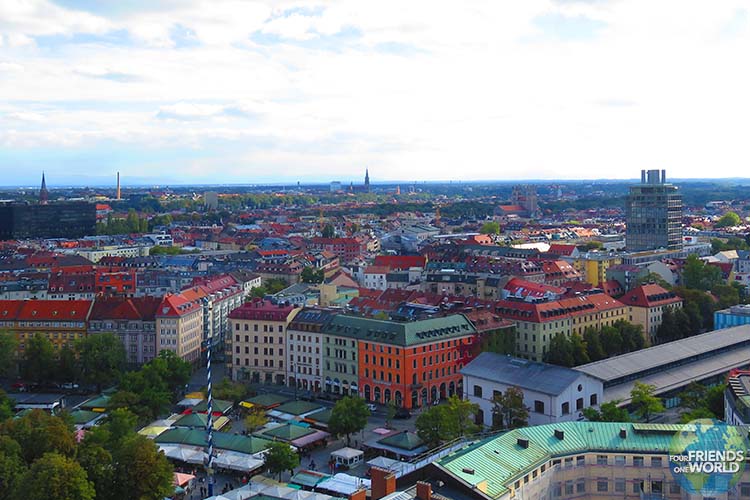 The capital of Mexico and with an estimated population of 21 million people, the Four Friends embarked on exploring their biggest adventure yet, Mexico City.

With only 2 full days to explore the city, the Four Friends squeezed in as much as they could.

Arriving into Mexico City International Airport in the late evening, it was straight to the Hotel Krystal Grand Reforma to catch up on some sleep before our first full day of adventure.

When we began planning this adventure, we very quickly realised that we would not be able to fit everything in our first visit. We stumbled upon a website, ToursByLocals.com that offers private personalised tours by local members of the community. With over 30 countries on offer for tours, this is a great way to meet the locals and create the type of tour that you want to do rather than be bused around with 100 other people and little time to visit the sites. We decided to try something that we have never done before and booked a sightseeing, market tour and cooking class.

It was an early start to the day, meeting our guide Heike at the San Juan Markets. These markets are over 150 years old and has a variety of gourmet, exotic and imported fresh ingredients. Here, we wandered through the stalls and learnt about local fruits, vegetables and meats that we had never seen before. We then each picked out 1 item each that we would like to try, and this gave us the opportunity to interact with the locals (try to anyway!)

We then headed off on the next part of the tour. We walked through to Chinatown, known locally as Barrio Chino, which is said to be only the smallest Chinatown in Mexico but in the world (only 2 blocks). As we continued we saw some amazing architecture sure as the Palacio de Bellas Arte (Art Museum) and the Catedral Metropolitana de la Ciudad de México (Mexico City Cathedral). The Cathedral is a stunning piece of architecture. Building started in 1573 and finished in the 19th century, it sits opposite the Republic Square. The cathedral is open to visitors. Be sure to check opening times before you visit. We learnt about the food culture in the downtown core and also how the city has grown and changed over the decades.

Then it was off to the 2nd part of the day – a cooking class. We entered through a small non-marked door on a bustling street, down a long hallway that opened up into a beautiful courtyard. We were now in a small housing community. Over the next 3 hours, we immersed ourselves in what a typical day of Mexican cooking would be. This still remains to be one of the most amazing travelling experiences we have had together.

In true Four Friends fashion, the day was not over. We had yet another tour to take in that would take us into the evening hours in the city. This tour was a Cantinas, Mariachi & Lucha Libre adventure! The evening started at the top of Mirador Torre Latino (TV Tower) which is a skyscraper in the middle of the downtown core with stunning views of the entire city. Here the group drank, of course, Tequila!

Next was a short walk through to Plaza Garibaldi which is a square that is filled with budding Mariachi musicians ready to serenade you (for a fee of course). After some more tequila, it was onto the main event. We arrived at Arena Mexico to a sea of Lucha Libre masks. The arena is the premier wrestling arena in Mexico and was filled with people of all ages. Everyone was hyped and ready for the wrestling to begin. Although we couldn’t understand what was being said, the energy in the building was electric and it didn’t take long before we were on our feet chanting the names of the heroes and villains. If there is only 1 thing you must do when you visit Mexico City – Lucha Libre is a must do. One thing to note – no cameras of any kind are permitted into the arena. You must check them at the door. There are many different tours available or you can purchase tickets at the door.

After a good night sleep, it was up again early for our next tour. This time, we were heading South to Xochimilco.

On the way, we stopped at the National University of Mexico. Apart from being the largest University in Latin America, it is a UNESCO World Heritage after being designed by some of Mexico’s best-known architects of the 20th century. The main campus features a huge open courtyard that is full of murals that were painted by some of the most recognized artists in Mexican history such as Diego Rivera and David Alfaro Siquerios.


Xochimilco is also a UNESCO World Heritage Site and is best known for its extensive canal system the area attracts tourists and residents where you ride “trajineras” which are colourful gondola-like boats. These boats are brightly painted and almost all of them are adorned with a female name at the front. There is a long table in chairs on each boat which allows you eat and drink and you cruise down the canal. The canal is full of other trajineras that have merchants that sell a variety of things such as corn on the cob, cold beers, candy, flowers and children’s toys. There are even Mariachi bands that will float up to your boat and play a few songs.

On land, the area is filled with vendors and carnival rides for you to wander and pick up some locally made goods and food. We couldn’t resist grabbing a bag of fried crickets and palanquetas (a candied pumpkin seed and nut snack)

Our evening continued with a visit to the Monument to the Revolution. This is a monument to the Mexican Revolution of 1910. It is considered to be the tallest triumphal arch in the world. It stands 67 meters and construction was completed in 1938. Today, visitors to the monument are able to go to the top and visit the observation deck with panoramic 360 views of Mexico City. If you are feeling adventurous, you can climb the stairs to the summit.

The surrounding area of the monument has many restaurants and patios available for some authentic cuisine. We decided on Taqueria Fonda Argentina Revolucion. A traditional Argentinian restaurant that specializes in meat dishes. Although no one spoke English, we managed to order some delicious dishes including empanadas, stuffed peppers with cheese (find name) and grilled meats.

With an early afternoon departure to our next destination, we were limited with our time. We took an early morning stroll down the Paeso de la Reforma to the Angel of Independence. Probably one of the most famous monuments in Mexico City, this monument commemorates Mexico’s independence and is topped with the goddess of victory.

It was then time to pack our bags and say goodbye to Mexico City.

Follow in our footsteps with our Mexico City 2 day Itinerary.

Pin this for later:

By Sherri Vade January 13, 2015
Sherriden Vade, otherwise known as Sherri, is the group’s photographer and pop culture expert. Travel and Photography is her passion so being able to capture these amazing memories is a dream come true. Like her husband, Sherri is an adventurer at heart and loves trying new things.